The Rispin mansion was also used during the 1970's as a place for police dog training. It was told by various Santa Cruz natives in stories I read online that the sounds of barking dogs in the house could be heard long after the police training had stopped.
Later in the house’s history a man fell through the rotting floors, became injured and wound up dying of thirst before he was found. Years later these cries for help were also reported by many.

Even if these stories aren’t true, its foreboding presence, and the fact people died at the house, thrown in with the discovery of hidden passages and secret rooms, just provides a rich and spooky history. 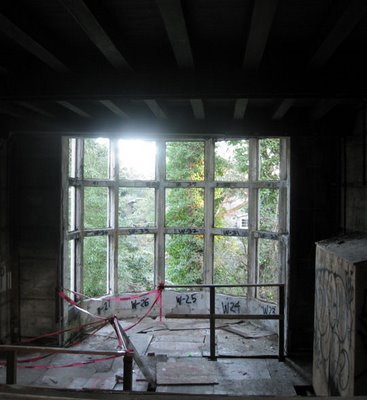 the massive column with bay windows that face Soquel Creek
an aerial view from mid-20th century, plus a host of really old images you can see here.
and finally.. 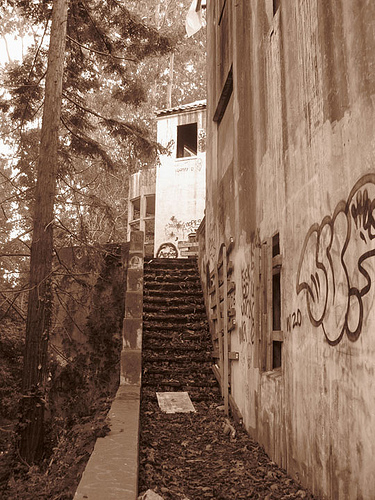 In this photo above I want you to focus on the main window above the steps — in this same window, in a 1931 picture appears the ghost of the Lady in Black — Click here for that image and see if you spot her. In that picture people say the Lady in Black is clearly visible with even bible in hand. Stories abound of her ghost roaming halls, unlocking heavily bolted doors and windows. Furthermore, other stories of a man in glasses near the fireplace were also passed down through the years.